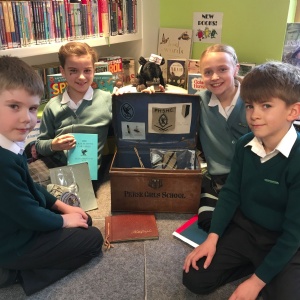 The Junior School had a jam packed History Week with a plethora of events!

On Wednesday afternoon all Junior School pupils had the opportunity to showcase their family history in our House History Event. When the pupils were asked to complete this homework project we didn’t envisage quite such an enlightening and reflective afternoon.

Many families worked together to discover what life was like for their ancestors, both recent and further in the past. With careful research, telephone and Skype calls to grandparents around the world and visits into dusty lofts to find heirlooms, the projects took shape.

House Captains took responsibility to ensure that their house meeting rooms were turned into museum style displays of the fantastic family history projects. They were also responsible for guiding their house members around the school to discover a treasure trove of artefacts, pictures, family trees and digital presentations in each room.

There were so many different projects ranging from ‘A day in the life of Grandparents in the 1960’s’, ‘Family journeys across America in the 1800’s’, and famous family members to name but a few. There were also some incredibly humbling stories demonstrating real hardships and living through traumatic events. The afternoon generated an exciting atmosphere around the school showing our pupils’ interest in discovering our shared histories.

So much effort was put into these projects and we hope that our pupils’ families enjoyed the opportunity to work together to ensure that their children have a greater understanding of where they come from. This History Week assignment certainly created a genuine appreciation of historical enquiry.

‘Fascinating to see peoples’ family history, it was interesting and there were amazing pictures to look at.’ Martha

‘Was good to see everyone's history and I didn't realise there would be so much to learn.’ Sammy

‘It was really fun to hear about other people and to learn about things we hadn't seen before.’ Isla 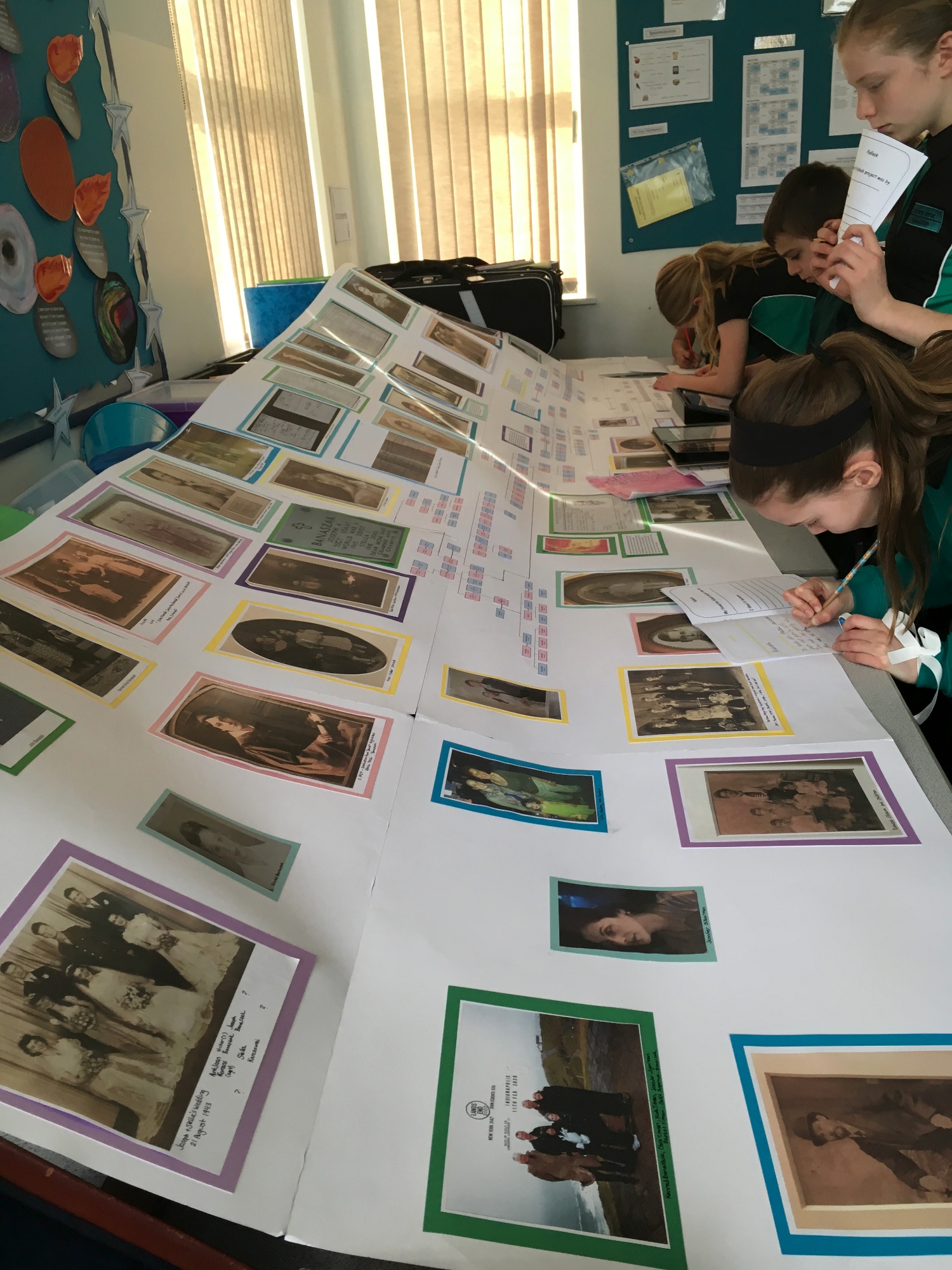 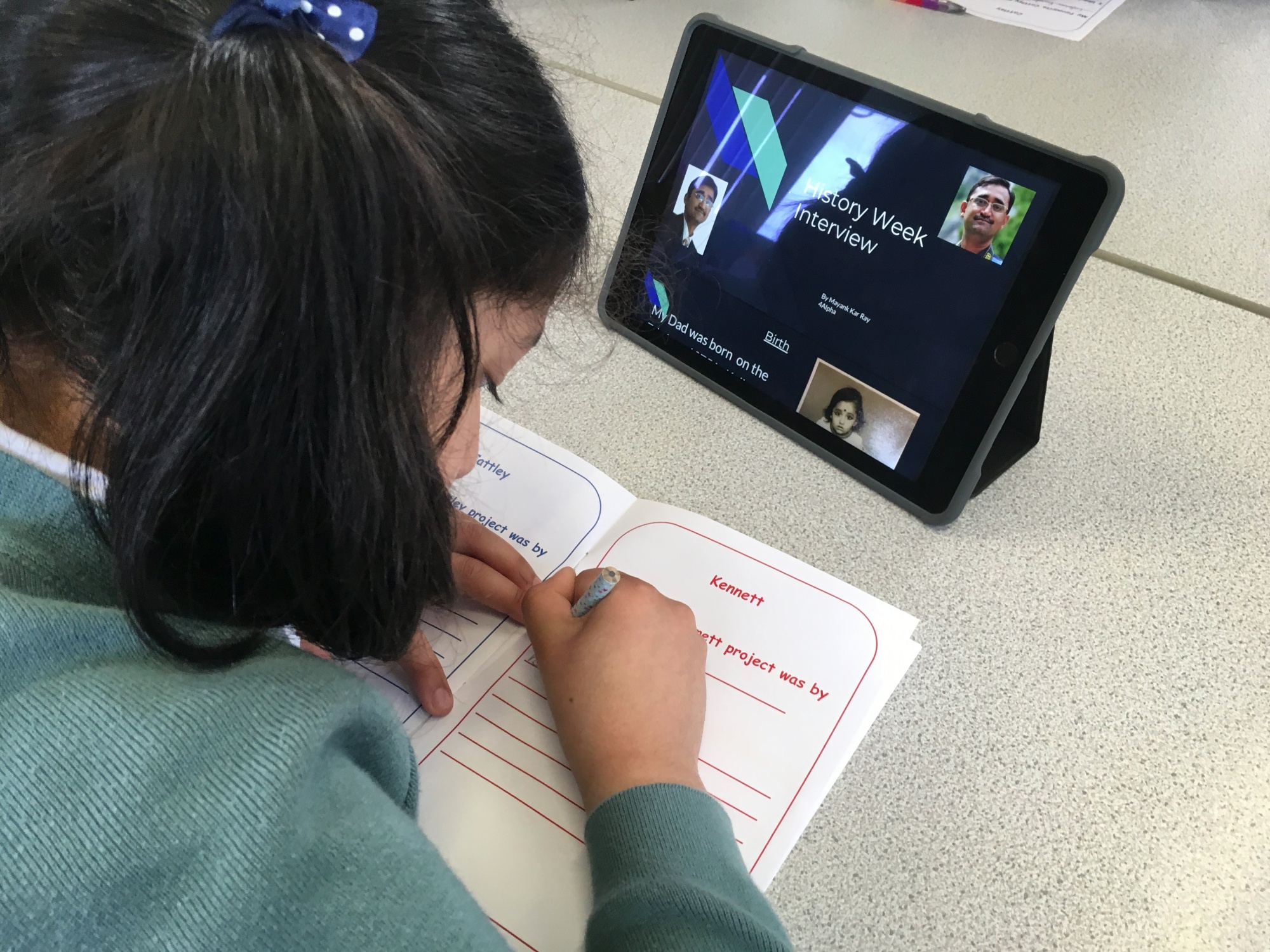 On Thursday afternoon, Junior School pupils walked over to the Senior School to take part in our first ever ‘Panel of History Experts’. In the week prior to the event, each year group was given biographical notes about the panel members and asked to generate some questions to put to the experts.

Once settled in the hall, Alexander in Year 6, introduced the panel: Miss Kelleher, Principal of the Stephen Perse Foundation, Dr Tustin and Mrs Stanley who teach History in the Sixth Form, Miss de Uphaugh and Miss Pryor who are studying History A Level, and Mr Russell who is studying History as part of his IB. Alexander added that we had some quite challenging and philosophical questions to ask.

Led by two outstanding comperes with microphones, Ilaria and Aaran in Year 6, the questions flowed, with many interesting and thoughtful answers given in response. You could hear a pin drop with the attention and concentration of every pupil in the room.

All too quickly the half hour came to an end. The session was wrapped up by Alexander who thanked the panel for their exciting responses and the audience for using skills learnt in P4C to generate questions demonstrating that our pupils know how to be ‘curious’ and ‘reflective’ thinkers.

We are very grateful to all six members of the panel for giving their time so willingly to this History Week event. It certainly expanded our pupils’ appreciation of the exciting possibilities to be gained from studying History. 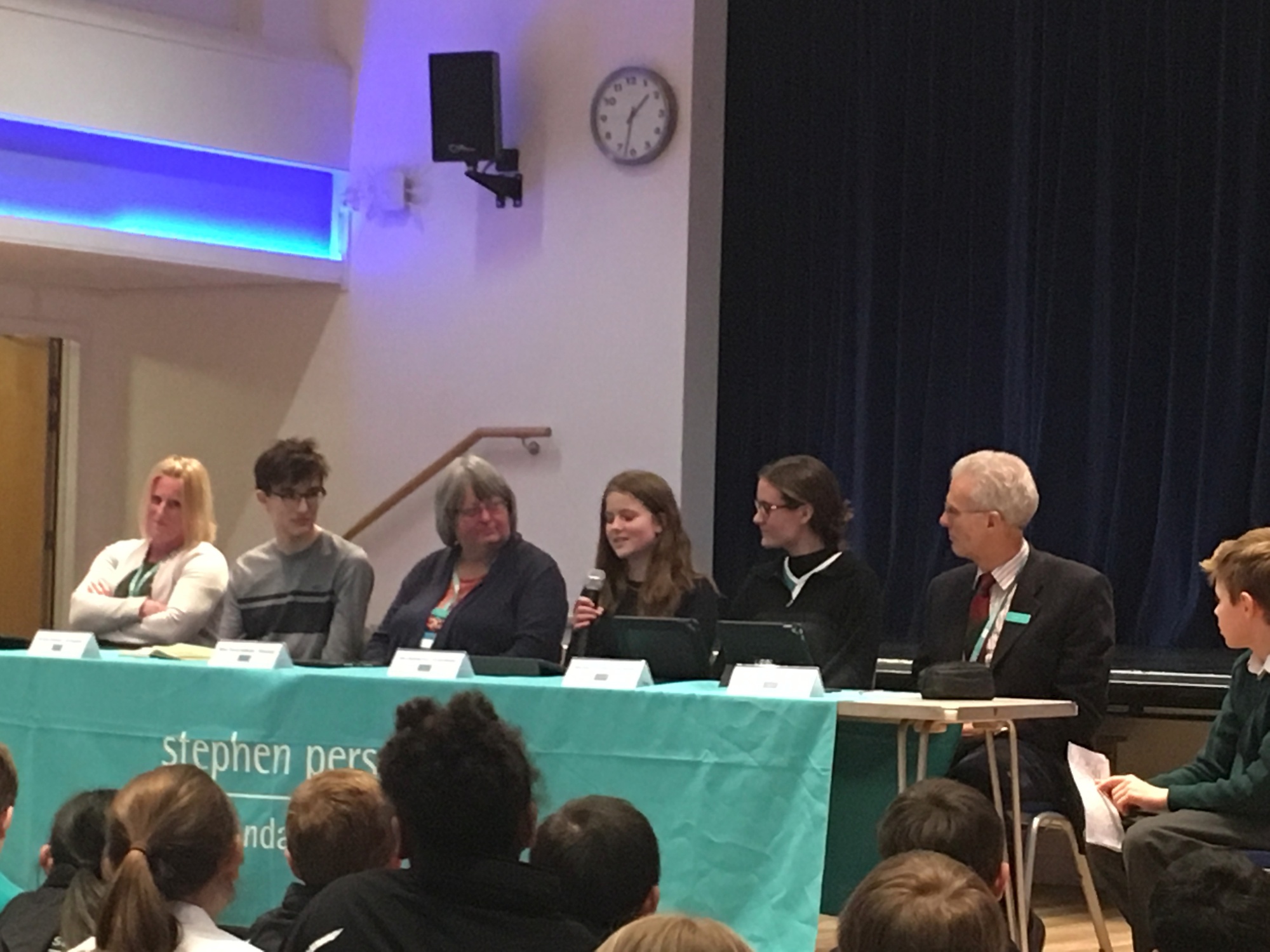 Friday break time saw the playground turned into an even more exciting area than usual with the History Week playground sale in aid of Coram http://www.coram.org.uk This charity was chosen by our School Council as it has a long history of helping children.

Each year group created games and posters to run their history themed stalls. We had a ‘Label the features of the 3D Roman Villa’, ‘Henry VIII archery target practice’, ‘WW2 Decoding’, ‘Build the Parthenon out of Sugar Cubes’ and ‘Minotaur Maze’ to name but a few.

Pennies were happily parted with in the hope of winning a prize and we were thrilled to raise over £200 for Coram. 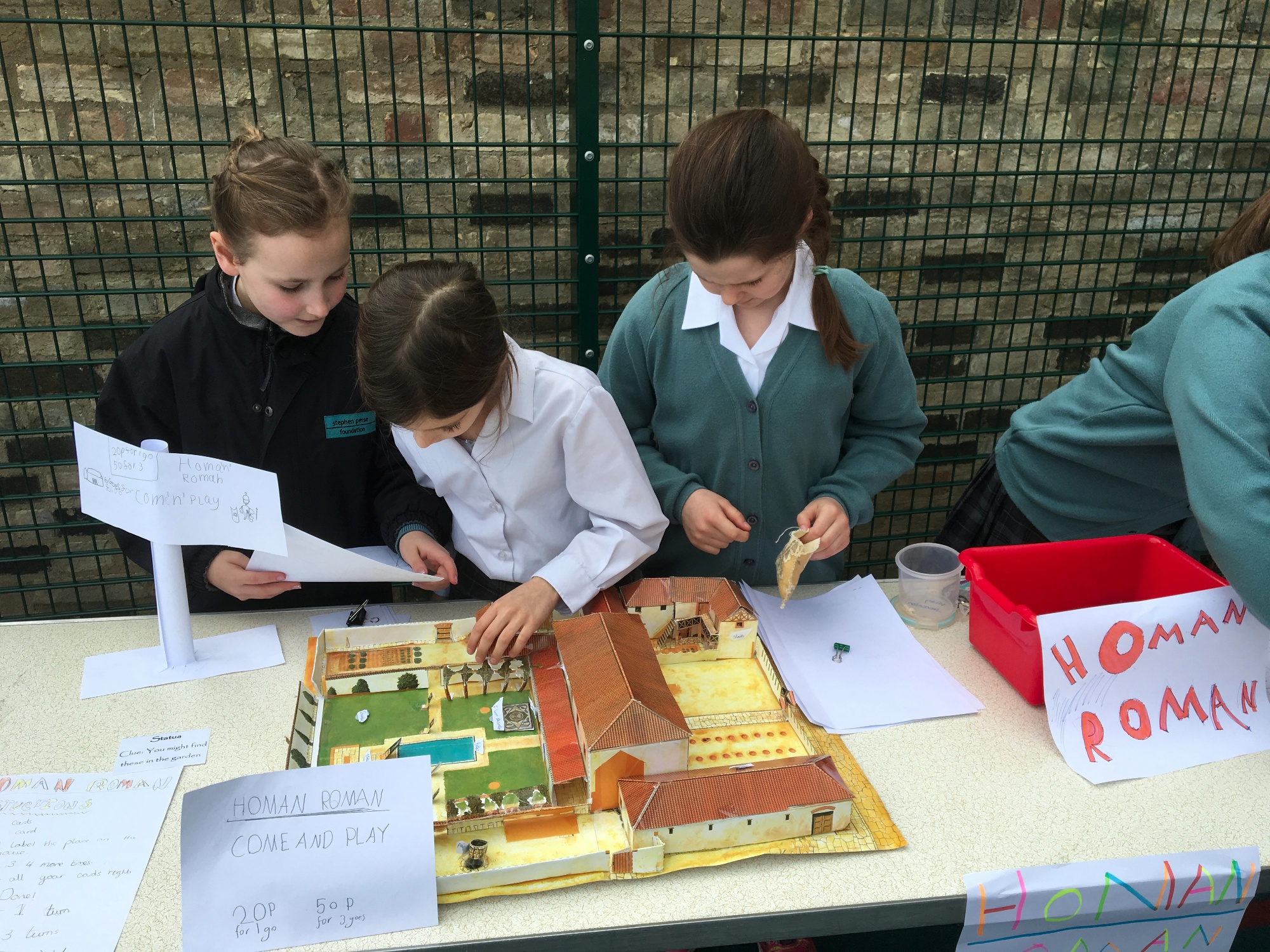 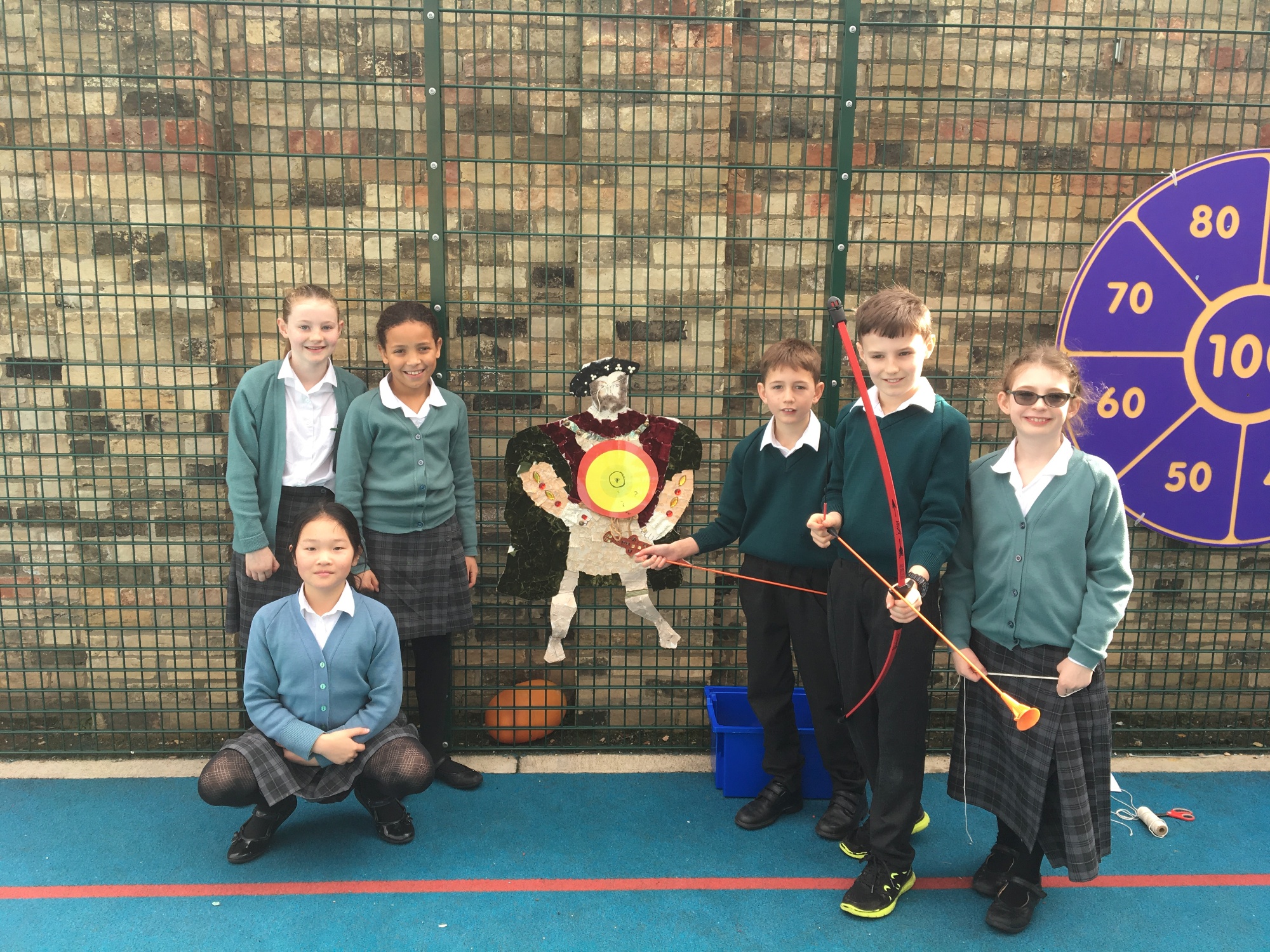 During History Week, pupils in the Junior School were encouraged to use their historical enquiry skills to complete a quiz. Dotted around the corridors were images of historical buildings, artefacts and famous people which the pupils had to identify. With the aid of modern technology (iPads were put to good use with many searches on the internet to work out the answers) and a few clues, pupils throughout the school rose to the challenge to complete the quiz.

A number of pupils in each year group came close to gaining full marks so watch out for them at quiz nights in the future! The only artefact that stumped them all was the Bird Clacker, used by young boys in fields in the 1500s to scare away birds. 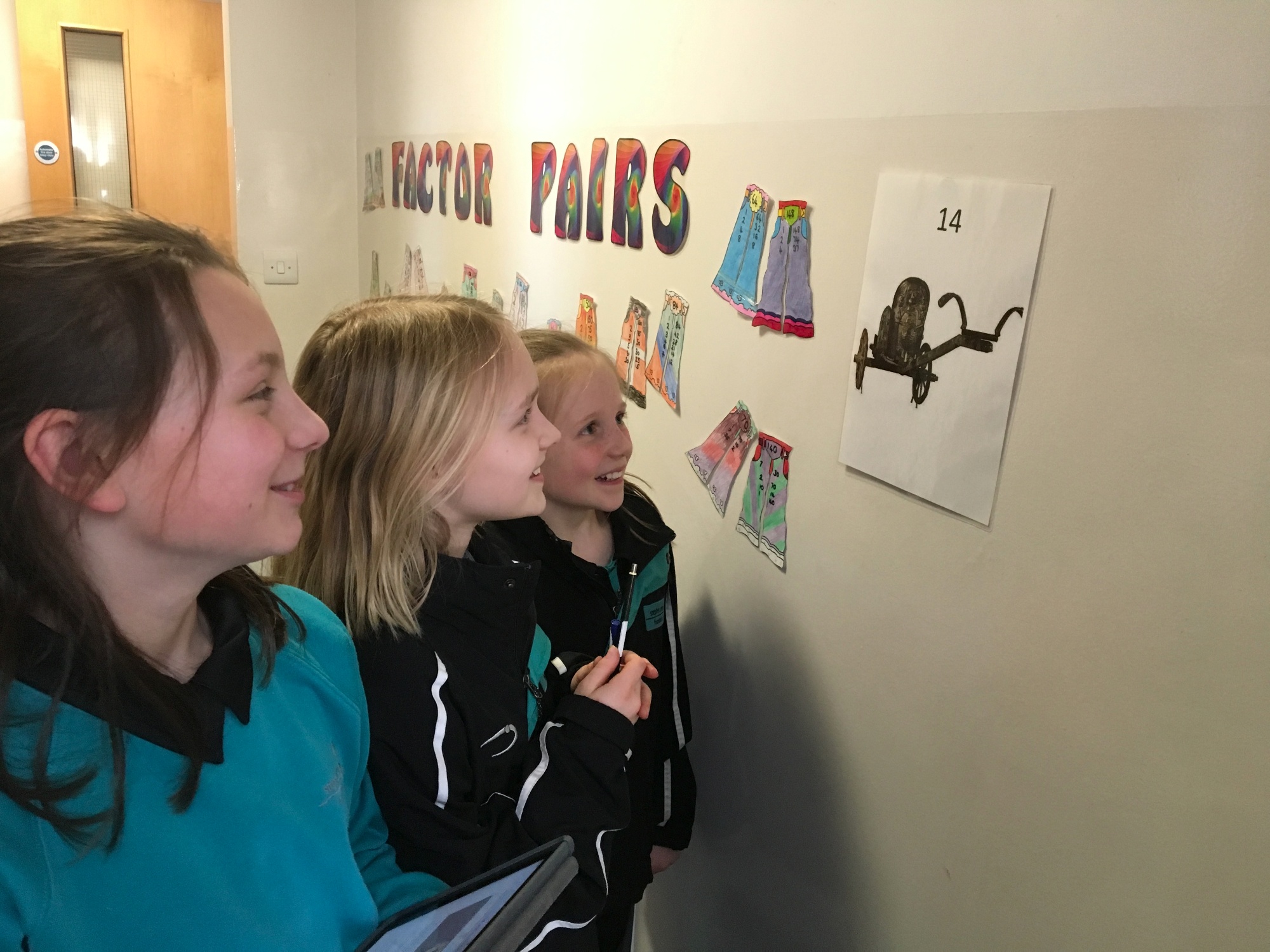 Each year group was given a particular period in history and asked to research events, people, buildings and artefacts to contribute to our whole school timeline. As you can see from the photographs, the pupils had no problem in finding interesting things to include in their contributions.

Seeing all the periods joined together, weaving through the school corridors, has given the pupils a greater understanding of how events fit together and help to build up our knowledge of the past.

We invited members of Years 5 & 6 to enter the 2018 'Never Such Innocence’ Poetry and Art Competition; this was designed to enable young people to play their part in commemorating the centenary of the First World War through the creative arts.

It was fantastic to see a few pupils take up this challenge and complete their entries independently at home. We hope that there may be a winner amongst those who entered to reflect the hard work and enthusiasm shown by these pupils.

Delving into the history of our school

To round up an exciting History Week in the Junior School, the pupils were shown a tin trunk, borrowed from the Stephen Perse Foundation archives, in assembly. They were encouraged to ask questions about this unusual artefact.

Many interesting questions were generated including, ‘Where was it dug up from?’ and, ‘Is it a time capsule?’ After hearing that it probably belonged to a boarder at The Perse School for Girls, which admitted its first boarder in 1884 at a cost of £15 per term, the questions really began to flow. The pupils’ understanding of historical enquiry increased and they soon realised that the more questions we ask, by using evidence and sometimes guesswork based on our current knowledge, we can piece together jigsaws to find out about the past.

We have definitely had an in-depth focus on History this week and who knows which pupils will be inspired in the future to take a step back in time and make important historical discoveries! 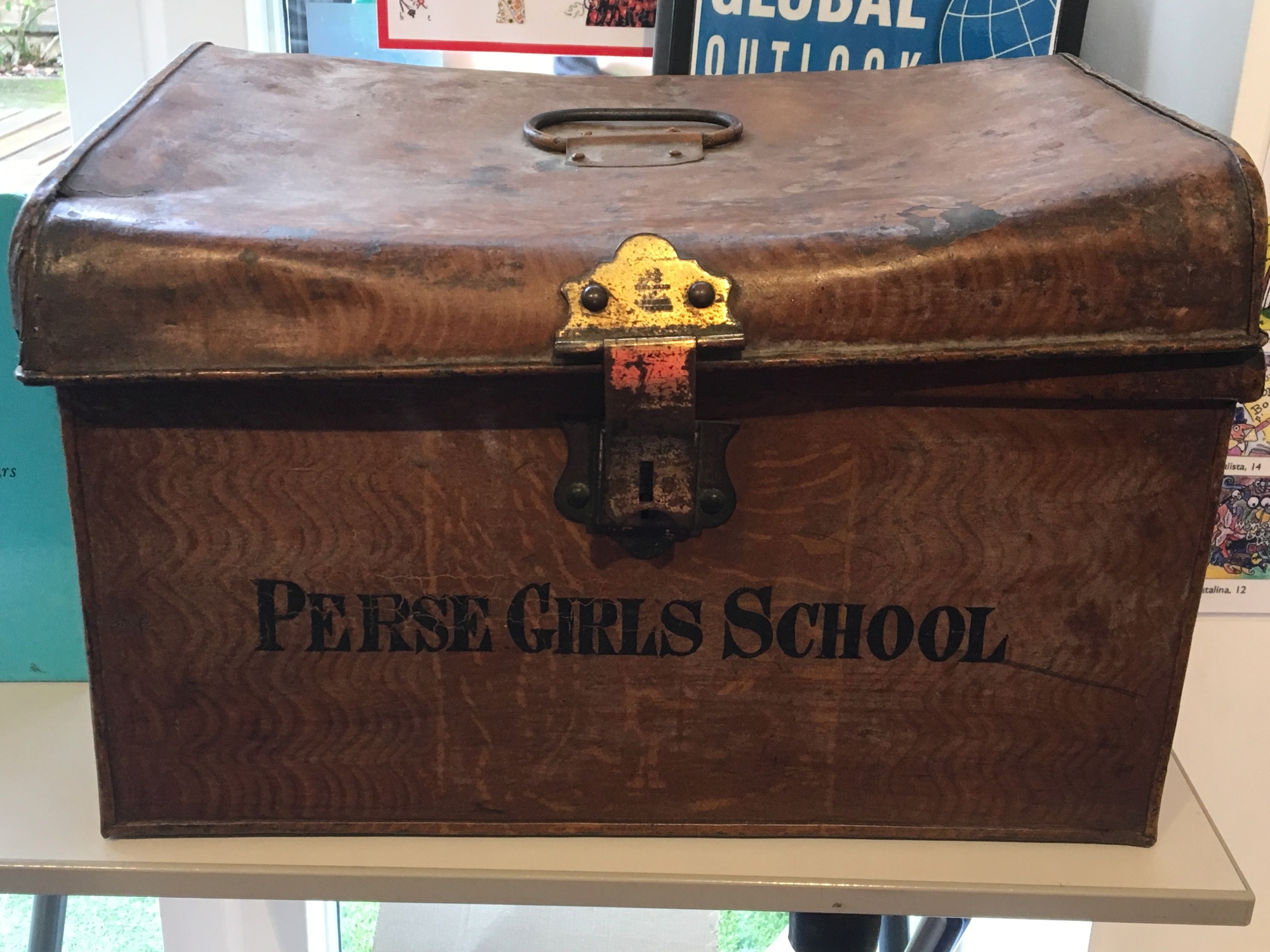 Junior School pupils have been learning about some of the key figures in French history in their French lessons. They have created a timeline in which some of these characters introduce themselves.

Year 6 pupils have also done some research on the events depicted in the Bayeux tapestry, in preparation for their trip to Normandy in May when they will have the opportunity to see this incredible artefact for themselves.

After a brief overview of the history of Cambridge, Year 5 pupils looked at images of Cambridge buildings from different periods, ranging from the Round Church and various beautiful college buildings to the Judge Business School. The pupils than worked in small groups to replicate aspects of these in corrugated card, so that they could closely observe and appreciate the different architectural designs and features whilst enjoying some model-making. 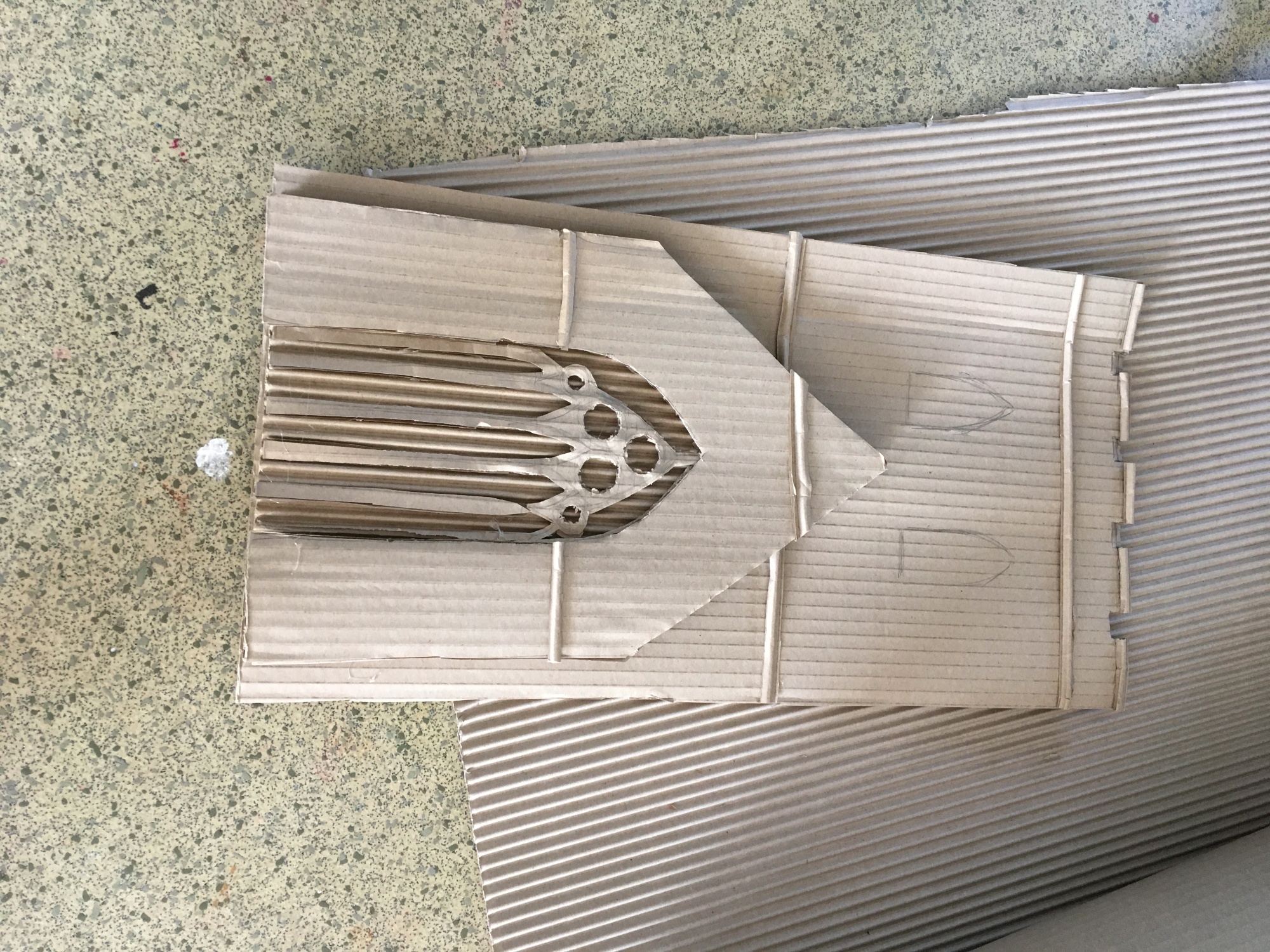 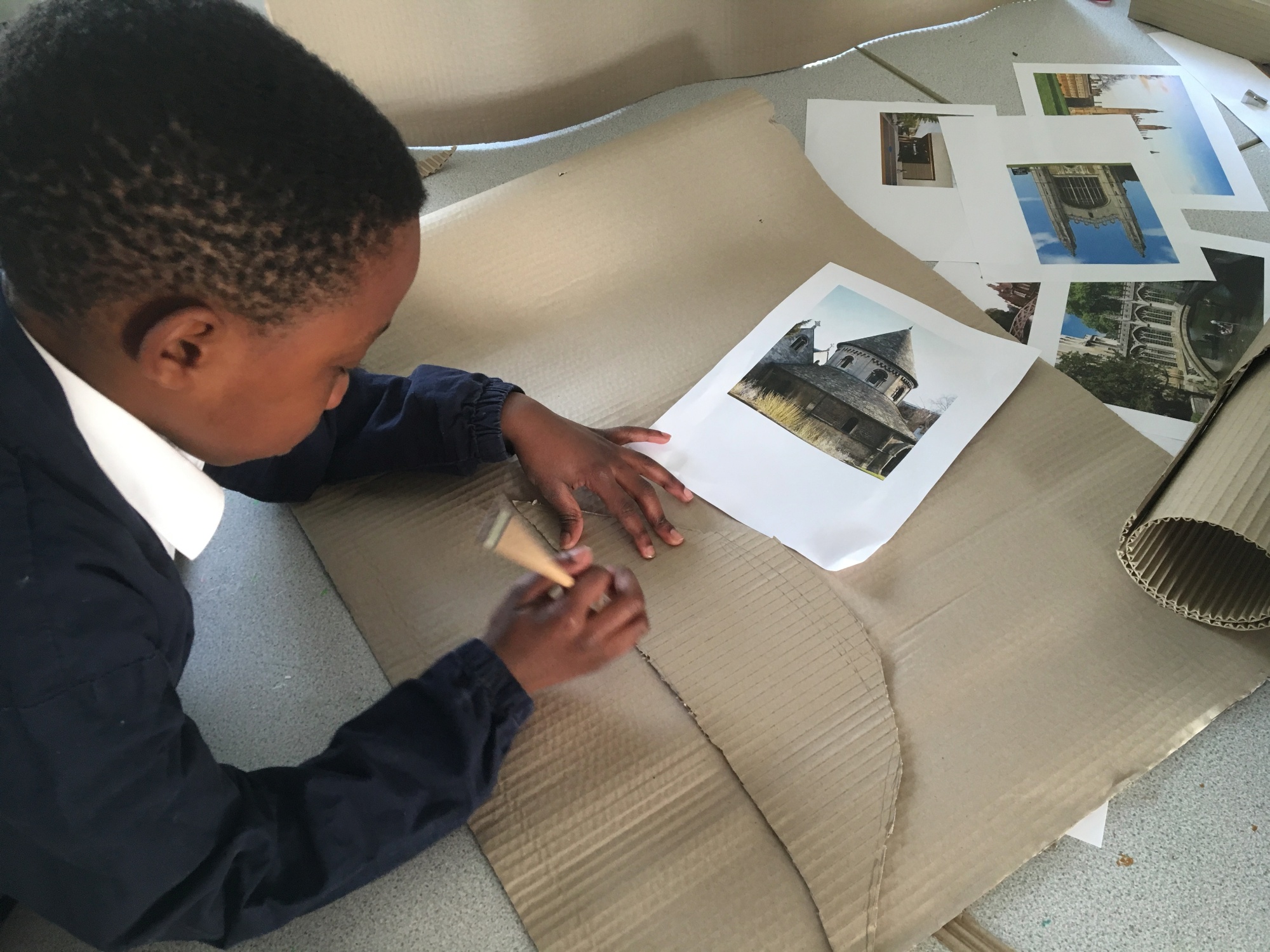 History week was marked in Science lessons with a series of activities aimed at giving pupils a deeper understanding of the historical roots of the Science they learn about in the Junior School and some of the broader philosophical and societal implications of scientific developments. The activities were based on the topic areas we are currently studying in different year groups.

Year 4 pupils have been learning about ‘keeping warm’, so we dipped into the history of temperature measurement, looking at an early thermometer design by Galileo, an ornamental model of which can be found in the Science Room. Having analysed the strengths and limitations of this device, we then looked at how the familiar thin glass tube thermometer proved much more accurate and reliable and paved the way for the development of scales of temperature measurement. We looked at the stories of the real people behind the scales, Gabriel Fahrenheit and Anders Celsius, and how the level of precision they made possible helped to make our modern world.

Year 5 pupils have been studying ‘changing sounds’ and their historical focus was on Alexander Graham Bell, whose passionate interest in sound led him, by a roundabout path, to the invention of the telephone. The story focused on how Bell became obsessed with sound as a result of his mother’s deafness and his father’s teaching of deaf children, leading him to work on ways of using the then-new technology of electricity to help people to hear better. A challenge to improve the telegraph system then spurred him to try and develop a machine which could transfer the human voice from one location to another leading, accidentally, to the telephone as we know it today. The story provided the pupils with a deeper historical perspective on the transformative power of science and technology and the role of serendipity in the process of discovery and invention.

Finally, Year 6 pupils have been looking at history in the longest of perspectives, the history of life itself, as part of our topic on ‘adaptation and evolution’. They delved into the history of ideas about how life has changed over the aeons, through the work of such evolutionary pioneers as Charles Darwin, Alfred Russell Wallace and Mary Anning. As part of these studies, we were fortunate indeed to have access to the Senior School’s fossil collection, which includes some remarkable historic specimens. These helped the pupils to gain a deeper perspective on the concrete evidence for some of the most profound ideas to shape our views of ourselves, the philosophical implications of which are still being worked out.